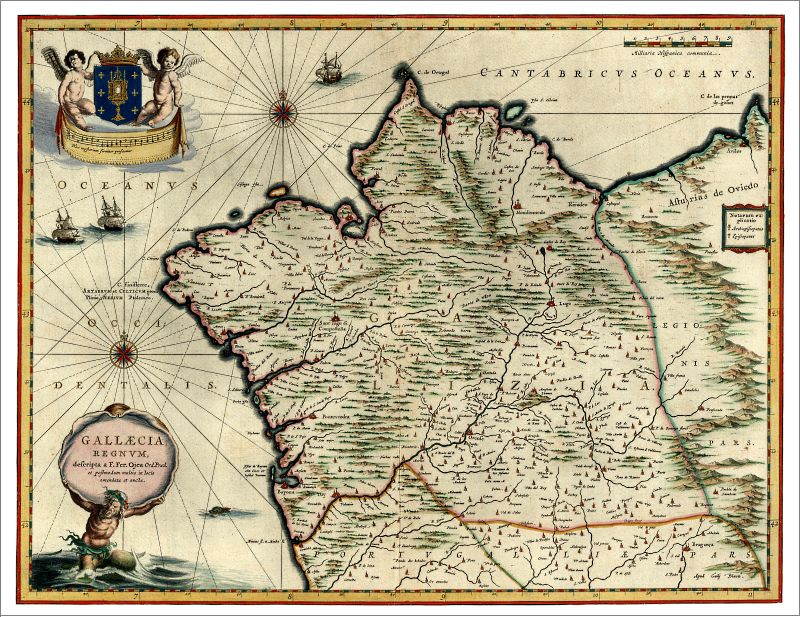 Product details:
» High quality reproduction of the map "Gallaecia Regnum" (Kingdom of Galicia), made by the Galician cartographer Fernando Ojea and printed in the Netherlands around 1640 by Dutch publisher Willem Blaeu.

One of Galicia's most popular old maps, made by the Galician cartographer Fernando Ojea (1560-1615) and printed at the workshop of the famous mapmaker Willem Blaeu around 1640.

Ojea's maps are often credited with causing a change in the national Coat of Arms of Galicia. Historically, the Galician arms featured the Holy Grail over a blue field semé of crosses. In his maps, Ojea featured a brand new variation of the traditional Coat of Arms including only six crosses on the field, three on each side of the Grail. From here onwards, Galician illustrators and scuptors started adopting Ojea's new design and the traditional field semé of crosses was eventually abandoned.

The map shows a few curiosities such as ancient Celtic placenames which are no longer in use today (Artabrum Celticum Nerium Pro instead of Cape Fisterra), the name Insulae Deorum (Isles of God) referring to the Cies Islands, and the township of Ogrobe lying on an island off the Galician mainland (the island was eventually connected by the mainland by sand deposits just a few centuries ago).

The map also features Atlas, the titan and king of Atlantis, a prosperous kingdom which according to legend existed on the western end of the known world.

This map was published by Willem Blaeu, the appointed mapmaker and publisher of the Dutch East India Company and one of Europe's most important mapmakers.