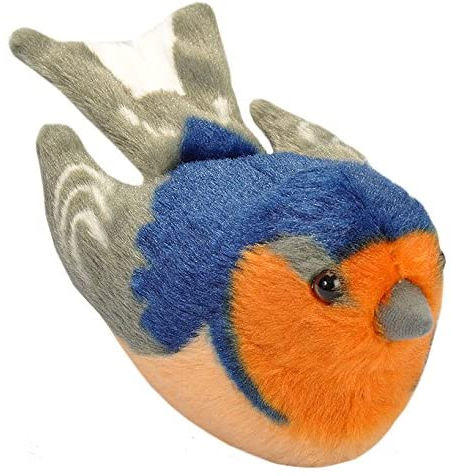 Galicians have had a close relationship with Swallows for thousands of years: Swallows feed almost exclusively on insects and as such they are tolerated by people. Because they originally built their bowl-shaped mud pellet nests on cliffs or in caves, they have readily taken to using our houses and outbuildings as nest sites and they have thereby infiltrated our language, customs and beliefs.

Known in Galician as Andoriña, the Swallow was considered as a protector of the house. A widespread Galician Christian legend tells that a group of swallows relieved Jesus Christ by removed the crown of thorns off his head. For that reason, it would be a sin to bother a swallow or destroy its nest. In the western town of Padrón, Co. O Sar, the local Virgin Mary is depicted with a Swallow on its crown. A local song says "O Señor bendiga â ave que leva nosa Señora" (God bless the bird that is with Our Lady).

This is a cuddly, singing soft toy with an authentic digitally reproduced bird call. This lovely Swallow simply neds a squeeze and you can listen to his call. Perfect for story-telling and imagination play by bird-loving children and adults alike.