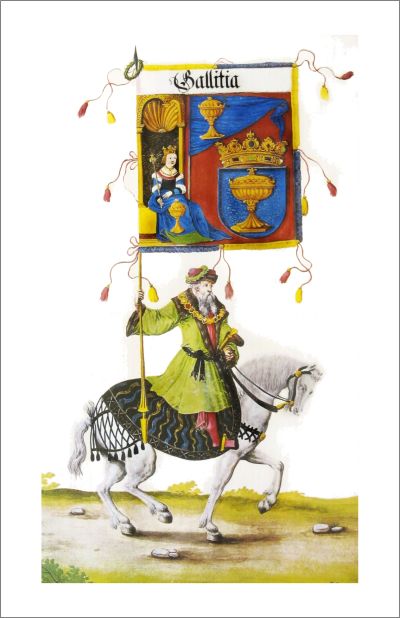 Product details:
» High quality reproduction of the Triumphzug Kaiser Maximilians (Triumphal March of Emperor Maximilian) featuring the Arms of the Kingdom of Galicia. Print made by Albrecht Altdorfer between 1513-1515.


The Triumphzug Kaiser Maximilians (Triumphal Procession of Emperor Maximilian) is a series of prints commissioned by the Maximilian I to demonstrate the extent of his empire and immortalise him as a powerful emperor.

Holy Roman Emperor Maximilian I (1459-1519) was one of the most influential rulers in the history of Europe. Through war and marriage he expanded the House of Habsburgh over most of Continental Europe. In 1498 Maximilian gained the Kingdom of Galicia through the marriage of his son Philipp I with the future queen of Castile and Aragon.

Made between 1513-1518, the Triumphzug Kaiser Maximilians shows a procession of knights representing all kingdoms under the Emperor's rule. The march is headed by groups of hunters, musicians, infantry and cavalry, which are followed by Bannerträger or standard-bearers from each kingdom within Maximilian's Empire.

The Kingdom of Galicia's standard-bearer is elegantly dressed and wears gold jewellery with precious stones. The royal standard -with its traditional Royal Blue and Gold colours- features a queen wearing a dress with the arms of the Kingdom, next to which stands the flag and the coat of arms of Galicia.

One of the best works of the German Renaissance, the Triumphzug Kaiser Maximilians was made by the best European illustrators of the time, including Albrecht Altdorfer, Albrecht Dürer and Hans Burgkmair. The illustration of the Kingdom of Galicia was made between 1513-1515 by Albrecht Altdorfer, the famous engraver, painter, architect and main representative of the so called Danube School.